The Binding of Fenrir

It is a gorgeous November morning. I am sitting next to an open window, a cool breeze wrapping itself around me as I type, hot mug of coffee keeping me company. It's been a long six months. I've not tended to my blog as often as I would like to largely because of the busy-ness of my professional life, and the turbulence of my personal life. But today I am making space.

I suspect that Instagram has been both a help and a hindrance to writing longer blog posts: on one hand it's a wonderful medium for expression when I can't (or don't want to) be exhaustive with my language. I can post every day, as much or as little as I like, which means that consistency isn't a challenge. However that very thing also diverts my energies away from focused posts in this platform. It's always therapeutic, in a way, to put thoughts to "paper," and I am working on ways to integrate blogging back into my more regular practice again. That said, if you don't already follow me on Instagram, you can find me at @firstearthtarot :)

So back to the moment. In many ways the texture of my life seems to be finding a calmer and more predicable pattern after a 2017 spent largely on destruction, release, reorganization, new connections, purging, dis-integration, chaos, discomfort - you know, fire and brimstone, basically. The Tower was a pretty common daily draw. And yet while life is ebbing away from the deep, frequent (and exhausting) rise-and-fall of energetic currents, there are artifacts left in the wake; items that cannot simply be strolled over, but that rather urgently demand the attentions of my consciousness. It is the next phase in some new and unfolding chapter. An IG challenge prompt for today asked:

What is really holding me back? (And how can I work with that energy?)

Surt 🔥 and Fenrir 🐺 from the Giants Tarot: 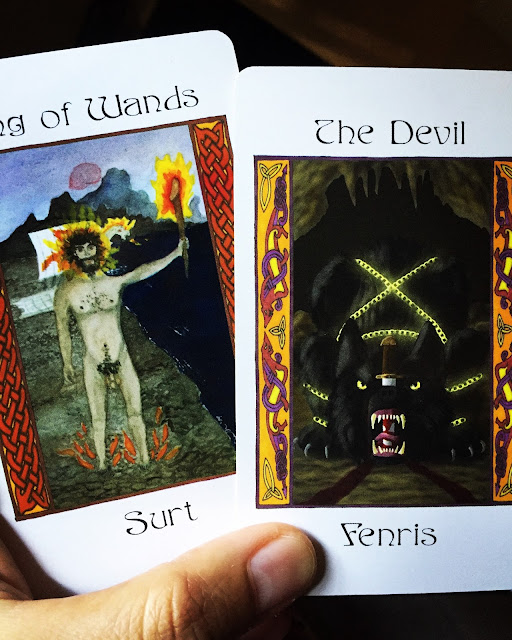 A powerful duo, that speaks in layers and very clearly. Fenrir's is an interesting tale. Son of Loki and Angrboda, it was prophesied that he would be Odin’s end, and so the Aesir bound him on an isolated isle until Ragnarok. The funny thing about prophecies is that we can never be entirely sure that the actions we take to avoid them aren’t precisely the actions that cause them to manifest. Perhaps it was the very binding of Fenrir that produced the deep, ferocious, all-consuming fury that ensured Odin’s ultimate demise.

It is interesting to speak of binding when the prompt today is itself about restraint.

What am I holding back?
What lurking shadows act like chains to my limbs?
What simmering power must be released from its pot in order not to boil over?
Will restraint lead to resentment, a wave of potent sentiment that only ever turns back on itself eventually?

If the Aesir had not bound Fenrir, but developed relationship with him (as had Tyr prior to betrayal), how might the story have been different?

So, perhaps the key lies in the (continued) deepening of my relationship to my own shadow self; it lies in making space to understand and recognize those emotions, to let them breathe, so that they do not consume me. 🔥🐺⛓🔥
Posted by Olivia Peters at 9:21 AM