Ghosts of Christmas Past, Present, and Future

For the month of December I am participating in a loosely heathen-centric Instagram challenge hosted by @MagnoliaMoonHolistic called #mmyulechallenge. For days 15-17 the prompts are very Charles Dickens: Ghost of Christmas Past, Christmas Present, and Christmas Future. As when drawn together this creates a nice spread, I've chosen to combine the days thus, and pull cards from the Dreams of Gaia Tarot: 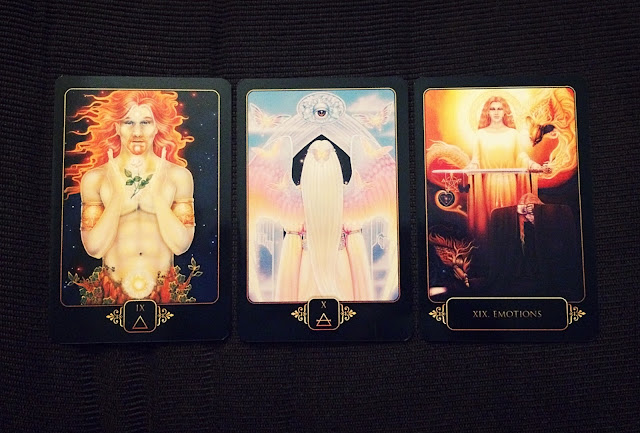 I love the mirroring of this line. The two end cards are fiery and bright, and the figures look outward, while the middle card has cooler colors (fitting for Air), and the woman is turned away, looking through a portal into the universe. Numerologically, the 9 and 10 make 19, reflecting and amplifying the energy of the Major Arcana card.

The 9 of Fire brings forth an energy of intensity and pressure. This image underscores the idiom "grace under fire." This man has absorbed and transformed the sense of chaos surrounding him, and has produced from it a white rose of peace and potential which floats between his hands.

The woman in the 10 of Air is processing the depths of a new personal paradigm. She is looking into the universe, into herself; she is willing to release, to be released, and thus to be reborn.

Major XIX in the Dreams of Gaia is called "Emotions" and in a similar vein to the more traditional Sun, it connects to the expression of joy and happiness; the invitation for those powerful experiences to be called forth, honored, recognized; to allow them to move, to breathe, through you.

In the past year I've certainly seen some radical and positive changes in my life. The 9 of Fire pressure that propelled me forward; that taught me about my will and fortitude; that pushed me to keep striving, and to keep my faith; ultimately fostered a particular experience of abundance and personal power that I'm sure has fed into the reconceptualization of the 10 of Air. The other day I was on a walk with my husband and I was telling him about how different I feel, how much I've grown in the last twelve months. I'm the same, and I'm different; I'm a better, stronger, more refined expression of myself. I see through new eyes. I see new possibilities. The hint of sadness that seemed to lurk for so long beneath the surface of my waking mind has evaporated. I feel the warmth of that joy unfolding, and I'm truly and deeply grateful.
Posted by Olivia Peters at 12:48 PM 2 comments:

My daughter recently gifted me a gorgeous rhombus of Iceland spar (clear calcite) for an early Yule present. It was very touching, both because it was such a lovely and thoughtful item, and because she herself was so moved by the experience. She recently started her first job and this is the first year that she has been able to shop for people on her own - there is a certain power in that sort of self-determination and self-sufficiency.

This calcite has been roosting next to my head as I sleep every night for nearly two weeks now. Since its arrival I've been having some very interesting dreams, almost on par with what I experienced with apophyllite a couple of years ago!
Last night was no different. Though my dreams were extensive, there is one that stands out in my mind. In the dream I was with many other people - mostly women from what I recall - in what was essentially an observation deck or tower. However rather than a typical observation deck that you might find in the mountains, it was up in outer space, at a considerable distance from the Earth. It was meant to allow people to view our planet. As we were looking through the blackness of space toward Earth we noticed that there was a rainbow encircling it. A woman seemed to make a connection to Norse mythology, and said, "Hey! That is sort of like...." and she tried to pronounce a Norse word that she couldn't quite recall - but she was on the right track. I said, "It is Heimdallr!" Then my mother was there, and she asked me what that meant. I started to tell her about Heimdallr and how he protects the Earth, and as I spoke I was so overcome with emotion that I started to cry, and couldn't keep speaking.

Now, in mythology, Thor tends to claim the role of "protector of Midgard." Heimdallr is the Guardian of Bifröst, the flaming rainbow bridge that connects Midgard with Asgard. He will blow his horn, the Gjallarhorn, to warn the gods and goddesses of the start of Ragnarok (the end of the world of gods and humankind), and Bifröst will ultimately break when the Jötunn arrive. Thus begins the end (that ultimately leads back to a new beginning). So in this sense, Heimdallr's crucial position can also be considered one of protection.

In my dream, Bifröst was not so much a "bridge" as a ring around our planet. Beyond that, I have no interpretations for either the dream or the manifestation of Heimdallr (I never saw a human-like image - I saw the rainbow, and the rainbow was the essence of Heimdallr). But it was fascinating and moving nonetheless, and something I'll be pondering in the coming days.
Posted by Olivia Peters at 12:28 PM 2 comments: