Week Ahead: Finish What You Start

Last Monday I drew two cards to highlight the predominant energies for the week ahead: Queen of Cups and High Priestess. Both were very relevant themes, and so on this Monday I decided to do to the same. After shuffling and cutting the deck I noticed that the "shadow card" was the High Priestess, forming a sort of thread of connection from one week to the next.

The two principal cards that I drew from the Giants Tarot were Death (Hela) reversed, and the 8 of Pentacles (Olvalde and Sons): 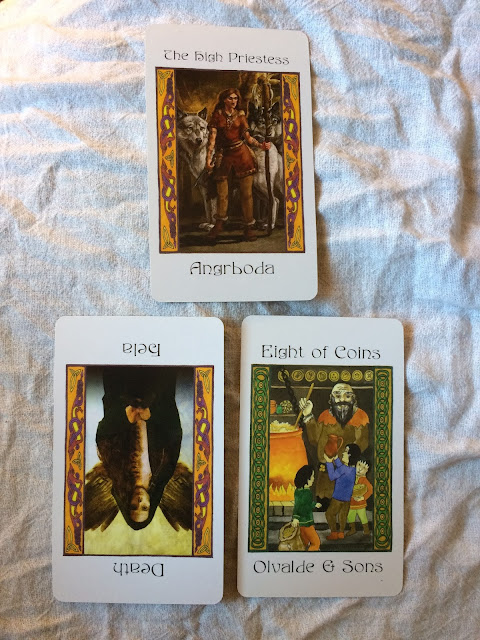 Hela is the goddess of the underworld, and Olvalde was an etin renowned for his ale-brewing skills.

This pair tells me that I'll be working diligently to tie up loose ends, to finish what I've begun, to work toward closing out projects. Indeed there is one rather large project that I've been wanting to finish for the past two weeks, but it keeps getting pushed off due to other urgent, more immediate issues that have been cropping up here and there of late.

Along another vein, when I see Olvalde and his kids on the 8 of Coins card, I see myself and my three kids making magic happen in the kitchen. So just maybe we'll see what fun we can cook up this week. Teaching the kids to make meals is such an 8 of Coins activity, and watching them grow into competent little chefs who can whip up some very nice grub is extraordinarily satisfying.

Have a happy week, everyone!

Update: It was indeed a productive week! I made a lot of progress on a pile of files I had been needing to tend to, and one of my team members ended up helping to revise the dregs of that big project that had been on the back burner.
Posted by Olivia Peters at 1:45 PM