Welcome to the Autumn Equinox Tarot Blog Hop, hosted by Jay Cassels and Arwen Lynch Poe. The topic this season is "Foodie's Guide to the Tarot" (though for all intents and purposes posts may feature any oracle or divination tool!).

The Equinox is celebrated around the world, and goes by an array of names according to tradition, culture, or region. Among the practitioners of the Northern Tradition, some refer to this equinox as Winter Finding, a harvest time where special attention is paid to the Vanir gods and goddesses of abundance and fertility, such as Freyja, Freyr, Njörd, and Nerthus.
Njörd is a god associated with wealth. He is also principally tied to the sea, and humankind's relationship with it: the winds, waves, the catch. Thus Njörd is connected to mariners, fishermen - any and all those whose living depends in some way upon the ocean.

The card featured here is from the Das Germanische Götterorakel (The Germanic Gods Oracle) by Voenix and Thomas Vömel. It is an 81-card oracle deck which represents the major deities, heroes, giants/jötunn, and overarching concepts in the Norse Eddas and Sagas. Here we see Njörd sitting on a coastline draped in seaweed, surrounded by gulls. An open chest of gold lies to his side, and a longship can be seen in the background. A keyword, "Reichtum," is listed on the card, which means "wealth."

I've often imagined some of my ancient North Frisian and Danish forebears - sea people, island folk - holding a special regard for this Norse deity. My great-grandfather left the island of Amrum as a young boy, and came to New York City with his family. Here they are, in the traditional dress of Amrum and Sylt (my great-grandfather is the boy at the lower left). 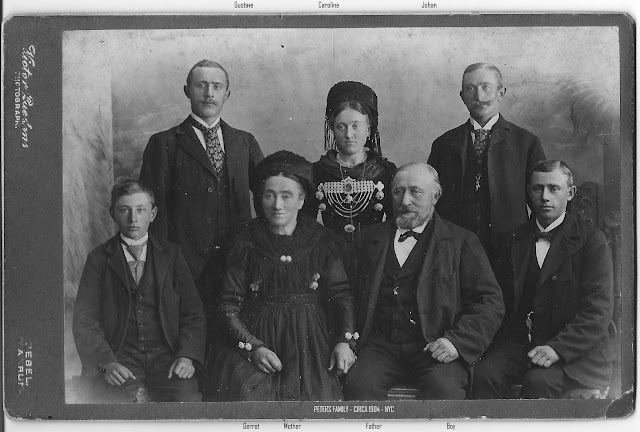 In the United States he met and married my great-grandmother, Emilie Hansen, from Ribe, Denmark. Ribe is the oldest town in Denmark, and one of the oldest towns in all of Scandinavia. It is located in southwest Jutland and borders the North Sea, not more than 100 kilometers from Amrum.

Gerret and Emilie's son, also named Gerret, was my grandfather, and of his three children, one of them - my aunt Lillian - dedicated her life to the U.S. Coast Guard, and for many years (until it sunk in harbor not too long ago) owned a boat she named "Norddorf," after Norddorf, Amrum.  I have fond memories of family celebrations aboard that vessel. The "sea gene" continued to breathe life into the following generations.
One of my earliest memories of my grandfather (who died of a heart attack while mowing the grass when I was barely two years old) is of sitting next to him at a cafe counter and ordering New England clam chowder. I was so young when he died that I can't be absolutely certain that this occurred, but I've had the memory since I can recall, and the recollection of my grandfather's clothing - a white t-shirt, blue jeans, a red baseball cap - has always been vivid.

Clam chowder is a fitting maritime meal, it's perfect for the cooling months of coming autumn, and it connects well with honoring Njörd at the Winter Finding, so I'll offer it here. 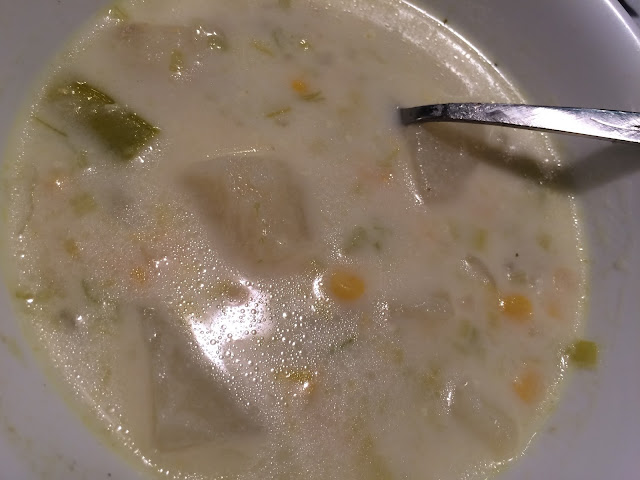 I am decidedly not the recipe sort so I'll do what I can to give accurate quantities...

New England Clam Chowder
Peel and chop the potatoes and place them in a large stove pot. Pour in just enough water to cover the potatoes completely, add a bit of salt, and let them boil. In the meantime, sautee the chopped onion or leek in butter or olive oil. If you like bacon, you can throw some in to add to the depth of flavor, just chop or crumble after it is cooked. Add the onion and oil/butter (and bacon, if you like) to the potato water. (Do not drain the potatoes - you'll use that water as the base for the broth.) Add the corn when the potatoes are close to done, and let simmer. Then add the clams and their juices. Finally, when the potatoes are soft, turn the heat down so that the liquid is no longer simmering (very low setting), and then add the milk or cream. Cream is finicky about being boiled, so keep that in mind. Milk is a bit sturdier. Mix it in and let it heat through. Adjust seasonings with salt and pepper as desired. Eat it up!

Now, as I said before, this is my attempt at quantifying a recipe that I usually just "eyeball." If you choose to go for it, don't be afraid to add more or less of any of these ingredients! And if you need precision, there are a lot of nice-looking recipes online that will do the trick (here is one).
Enjoy the Equinox! Happy Mabon, and a Blessed Winter Finding to you all!

Please use the links at the top or bottom of this post to navigate to the other wonderful blogs in this circle.

Previous | Master | Next
Posted by Olivia Peters at 5:00 PM